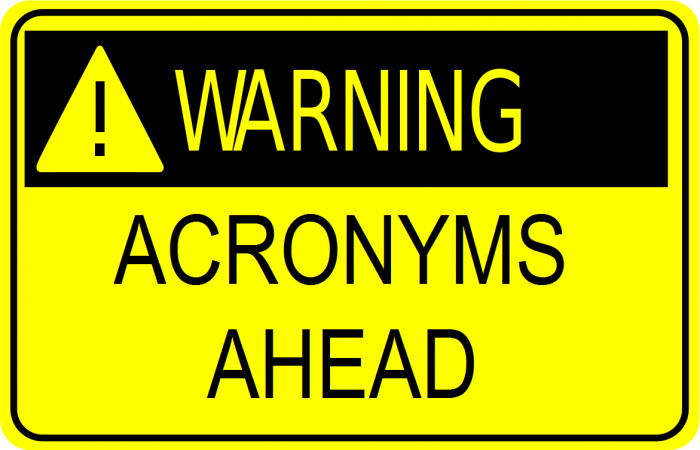 Data center industry jargon is filled with acronyms and expressions. Even the most experienced professional can get caught off guard by a new term or an old abbreviation. Here are the acronyms and phrases you’ll run into the most.

The flow rate of electricity. Also an element of the equation to determine Watts. (Amps x Volts = Watts)

Current flow is either alternating or direct. Direct current flows in one direction, while alternating current changes direction. (Together, AC/DC is also a great rock band.)

Cabinet - also referred to as a Rack

The most common means of housing servers and many other types of IT (Information Technology) devices within a data center. See "U - Rack Units"

A technique used to model, usually as a simulation, the way in which air will move heat through a data center. The output is often expressed as a colorful heat map.

A means of separating cooler air from warmer air with an aim of improving overall cooling system performance. There are many types of containment systems including aisle-based, chimney, in-rack, and liquid cooled.

Current transducers measure current on AC circuits. They make it possible for power meters to measure current on circuits that, if they measured the current directly, would overpower the meters. If you want to monitor power, you need to use CTs.

The name of the game. Also a term used to describe ERP (Enterprise Resource Planning) systems for data centers.

A club or restaurant that is difficult to get into. More often, for folks working in data centers, a hot spot refers to an area in the data center where the temperature exceeds desired levels.

Technology and infrastructure that attempts to provide the optimal indoor environment.

An international non-profit, non-government organization that prepares and publishes standards for all electrical, electronic, and related technologies.

Highly recognized model code for energy efficiency design, construction, maintenance and operation. The code is written by the International Code Council. You can subscribe to their site to see the full code.

The networking capability that allows information to be sent to and received from objects and devices using the Internet. The value of this interconnection is how the information can be leveraged.

An IEC classification used to express how well an item resists water and dust. It is used for many things including the "pin and sleeve" connectors that are common in data centers. IP can also stand for "Internet Protocol" and "Intellectual Property."

A source of confusion as it can mean a large floor-standing device that may incorporate a transformer and manage distribution of power to over 100 racks. Or, PDU can refer to a single rack-mounted device with multiple outputs designed to distribute electrical power to the devices in a cabinet.

Calculated by dividing Total Facility Energy Usage by IT Equipment Energy Usage. The closer the PUE ratio is to 1, the more efficient the facility. There's a good deal of controversy on this metric, but it remains the most common means of rating a data center's energy efficiency.

Measures the degree to which equipment racks are cooled and maintained compared to industry benchmarks.

Water content of the air relative to what it could be before it condenses at a given temperature. The temperature at which water in that same air mass would condense (form a fog) is called the dew point.

Same concept as a floor-standing PDU but without a transformer. See "PDU"

A dedicated high-speed network that interconnects and presents shared pools of storage devices to multiple servers.

A standard developed in part to provide a common means for gathering data from equipment made by different manufacturers. SNMP is currently on its third major version. See "Modbus"

The difference or change in temperature across a device.

A measure of how much your load is distorting the perfect waveform of the power provided by your utility. Typically measured for both current (THDi) and voltage (THDv).

The pressure of electricity. Named after Alessandro Volta, the voltage of household power ranges from 100 to 240V around the world. It can vary even more within data centers.

The measuring mechanism for power and named after James Watt. A kilowatt (kW) is 1,000 Watts. The average United States household uses 1kW of power every hour, which is also the amount of power received from the sun on one square meter of earth near the equator on a clear day.

The measuring mechanism for energy, equivalent to one Watt being used for one hour multiplied by 1,000. Electrical energy is usually sold in kWh. See "BTU"

We hope this list is helpful to you and your team. Did we miss your favorite (or least favorite) acronym? Let us know, and we'll add it to the list.

Contact sales@packetpower.com if you'd like clarity on how Packet Power can help you monitor what matters most to you.