Data center power connectors have several attributes. Maximum amperage and voltage are obvious, as is whether the conductor supports 3, 4 or 5 wires. You will also often see an "IP" designation, typically IP44 or IP67. Read on if you've ever wondered what that means -- or why IP67 can cost 10 times more than IP44.

The IP (International Protection) Code is an IEC classification for many things including the "pin and sleeve" connectors that are common in data centers. It rates the degree of protection provided against the intrusion of solid objects and water.  The difference between enclosures rated IP44 and IP67 is meaningful both in terms of level of protection and cost. 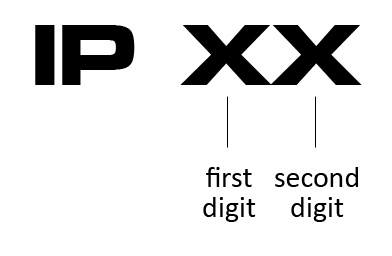 An IP44 rated connector is often referred to as "splash proof" and protects from objects greater than 1 millimeter in size and water spray from any direction. 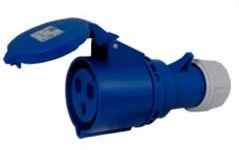 An IP67 rated connector is often referred to as "waterproof" and is dust tight and protects against immersion in water up to 1 meter in depth for up to 30 minutes.

Both of the connectors shown above are for a 3-wire, 32 amp circuit of under 250 volts. They can deliver the exact same amount of power, but at different levels of protection. That protection comes at a significant difference in cost, with the IP44 connector commonly available for under $15 while the IP67 version can cost well over $150. That price premium may easily be justified in rugged conditions or where failure due to immersion in water is possible and would bring major adverse consequences. In some circumstance it is also required to comply with the electrical code.

In general, connectors of 50A or under tend to be IP44 while on circuits of 60A or more the default is IP67, but either rating is available for most circuit sizes.  Many pin and sleeve connectors used in data centers follow a naming convention such as 460C9W where the first number is the number of wires (3, 4 or 5), the second two numbers indicate the amperage, the fourth position indicates the type of unit (C=connector, P=plug), the fifth digit refers to the "hour position" (a bit more complicated), and lastly, the W signifies an IP67 rating. The IP44 version of that connector would be denoted either as 460C9S or sometimes just 460C9.

IP44 and IP67 connectors both have a role in data centers. The key is to understand the differences and match the level of protection to your actual needs.