Three-phase power or the magic of the missing Neutral

Electricity can seem both simple and confusing at the same time. A refresher on things like the differences between volts, amps and watts never hurts. Or a recap of where a direct current system may make the most sense. One particularly tricky concept to master is the idea of three-phase power, especially in a Delta configuration.

Plumbing and car enthusiasts: rejoice! In this post we'll present a plumber's (or car mechanic's) version of a three phase power system.

Imagine an alternating current water system that delivers alternating pulses of water pressure and vacuum in a closed loop system, using two pipes (similar to how AC power flows). Water flows to the receiver (some sort of a hydraulic engine) through one pipe (let’s call it A), then back to the source through another pipe (lets call it N). Every few seconds the direction of water flow reverses. You can imagine the two pipes going to two ends of a cylinder, pushing and pulling a piston in a single-cylinder engine, translating the pulses of water into useful work.

Now imagine that you wanted to deliver three times as much power. You would need three such systems (A, B and C, with six pipes total, A-N1, B-N2 and C-N3). 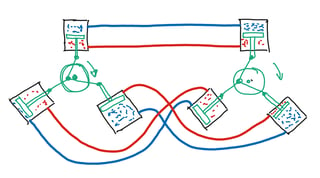 You could run the three pairs in sync (water flowing at same rate and direction at any given time in all A/B/C pipes and all N1/N2/N3 pipes) or you could run them out of sync (e.g. A flowing full speed in one direction, B about to reverse and C flowing full speed in reverse). Notice that if all systems have similar flows (except at different times), when N1 flows in one direction, N2 and N3 flow in the opposite direction. Moreover, if you shift them out of sync by exactly ⅓ cycle each, the flow in the N-pipes will effectively cancel out and you don’t really need the N pipes at all (or maybe you use just one common N-pipe instead of three to take care of any imbalances in the flow through the A-pipes that do not perfectly cancel out). 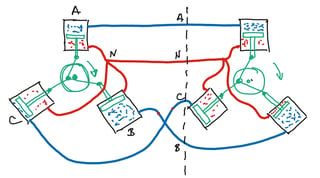 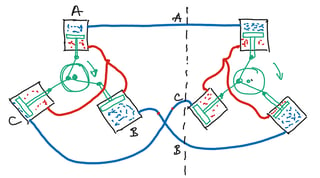 The same idea works for three electrical circuits. That’s why 3-phase power is so popular and is used for things like data centers and other power-hungry operations. It lets you transfer the same amount of power with less wiring, in some cases 50% less (using 3 wires instead of 6). In order for it to work you need three synchronized power sources (the three “phases”, usually called X, Y and Z) shifted by ⅓ cycle. The common "B" pipe in this arrangement is the "neutral".

If you use only the “A pipes” it is called a “Delta” (triangle) connection. In this configuration you are completely skipping the “B pipe” - the "neutral" magically disappears! In a delta 3-phase connection you use 3 power-carrying conductors (generally labeled X, Y, and Z). You may also have a 4th ground wire for safety. This is what electricians call a 3-pole 3-wire connection (3P3W, without ground) or 3-pole 4-wire connection (3P4W, with ground).

If you use the three "A pipes" and a common "B pipe" it is called a Y (“Wye”) connection (three legs plus a center). In a Y connection you use 4 power carrying conductors (labeled X, Y, Z and N) and an optional 5th ground wire for safety. This is what electricians call a 4-pole 4-wire connection (4P4W, without ground) or 4-pole 5-wire connection (4P5W, with ground).

Being Smart With Your Power

Packet Power offers branch circuit and multi-circuit energy monitoring systems that support 3-phase power in both Wye and Delta configurations and measure all key parameters of each individual phase within the circuit as well as total power and energy consumption.

Proper energy monitoring can help facilities identify where they may be paying for electricity that they’re not actually getting any use out of (a concept called power factor). Obviously this is bad for business. If you’d like to have a conversation about monitoring your power usage and making sure you’re getting the most out of your equipment, please reach out to us.