While cool air is one of the most valuable commodities in a data center, optimizing air flow and cooling can be difficult without a good picture of air movement through your data center. By using differential pressure sensors, it becomes easy to get a clear understanding of the air flow patterns throughout your data center. The cost and ease of implementation can translate to an ROI in as little as one month.

Understanding differential pressure zones and airflow allows you to:

Using Packet Power's environmental monitor with differential pressure sensor, you get comprehensive, real-time data on temperature, humidity and differential pressure. The monitor can be placed in strategic locations. Installation is further simplified with all monitors automatically connecting to the Gateway. No expertise is required as the network is self-configuring and data can be viewed immediately on Packet Power’s EMX Portal or integrated into any BMS or DCIM. 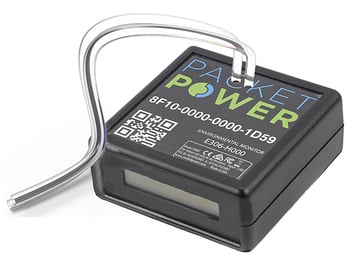 What Differential Pressure Tells You

If the differential pressure between two areas is high, that means that the flow rate of air between the high pressure and low pressure area will be faster. It does not tell us the volume of air flow, only the force.

Being able to observe differential pressure in key parts of the data center, enables airflow to be better understood, contained and directed, creating a more efficient and reliable environment.

Getting differential pressure data from Packet Power's E306 monitor is simple. Place one of the sensing tubes in a higher pressure zone like the base of a server cabinet by the air intake. Place the other tube in an ambient area with little airflow like the top of exterior of the server cabinet.

Packet Power's environmental monitor also allows up to six temperature points to be monitored via remote probes. Adding temperature measurements is an easy way to determine the cooling effectiveness of airflow changes. All measurements can be viewed on the local LCD display of the  monitor, or obtained via Modbus TCP/IP or SNMP through the Gateway (integrates with any BMS or DCIM), or via the Packet Power EMX Portal.